The first piece, ‘Am I Blue?’, is a pieced canvas construction that will be shown at Blackfish Gallery’s 35th anniversary show, “Being Blackfish”, in April 2014. The materials have been recycled from my piece ‘Deluge‘, which appeared at Blackfish in January 2013. The second piece, ‘Styx – Wall’, is also made from recycled materials, in this case from the original ‘Styx‘, shown in my one-person exhibit in 2011. The last piece, ‘Sewing Circles 2’, is a follow-up to the original ‘Sewing Circles‘, which was shown in June 2013. 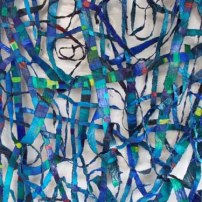